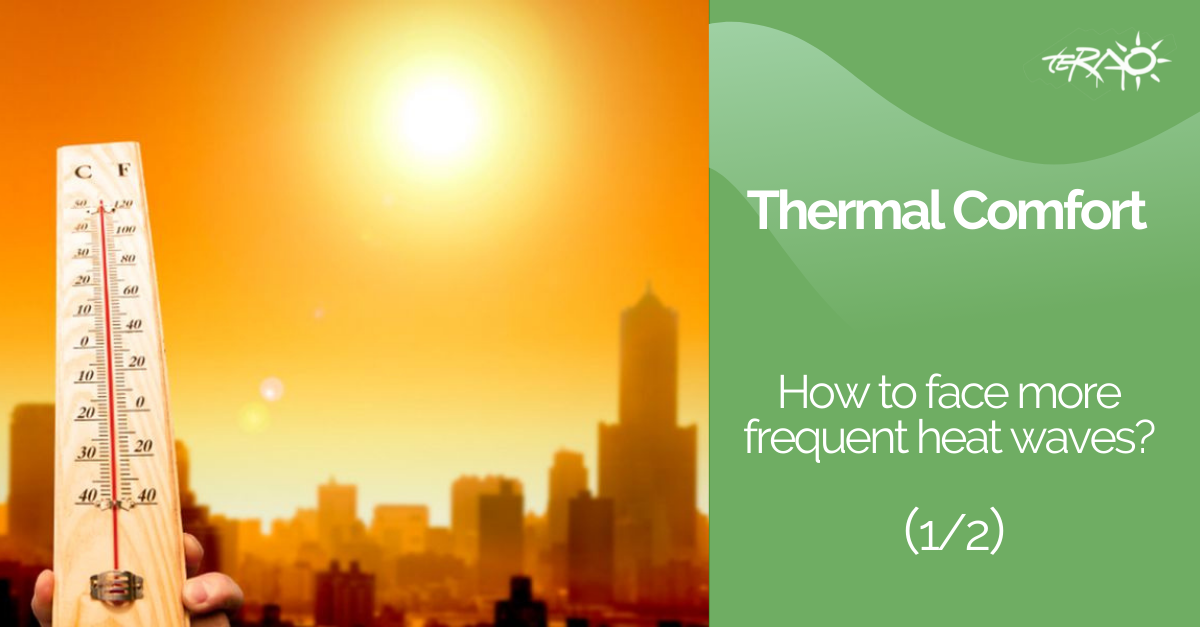 In the current context of ever more numerous and intense heat waves, the notion of thermal comfort in buildings is more relevant than ever. In June, France experienced temperatures 10°C to 15°C above seasonal norms. July and August also brought their share of heat waves!

Beyond national climate objectives and the reduction of its impacts, the construction sector must also meet the challenge of maintaining coolness inside the building, for the pleasure and comfort of its users. How is summer thermal comfort measured, and what concrete tools can be used to meet these challenges in the project design phase? Follow the guide…

Thermal comfort in buildings: a subjective notion that has evolved over time

In recent years and worldwide, heat waves have become much more likely and intense due to climate change. 43 heat waves have been recorded in France since 1947. However, we have experienced as many heat waves from 2005 to 2020 (in 15 years) as between 1960 and 2005 (in 45 years), with 4 episodes before 1960 and 26 episodes since 2000. The frequency of these events is expected to double by 2050. The summer of 2022 does not contradict this trend that everyone can now feel.

“Mortality caused by heatwaves in China has increased since 1979”, https://phys.org/news/2022-07-mortality-heatwaves-china.html

What is thermal comfort, and what factors influence it?

Thermal comfort is defined as the satisfaction with the thermal environment that a healthy person feels in a building after a certain period of adaptation.  This notion can be quantified. It includes subjective elements that an experimental and statistical approach has allowed to specify.

The factors having an influence on the thermal comfort are:

International standards for thermal comfort are based on the work of the Danish Povl Ole Fanger (deceased 2006). His key work, “Thermal Comfort”, was published in 1970. P. O. Fanger put a thousand students through climatic chambers, controlling various parameters: air temperature, surface temperature, air speed, clothing and activity. At the end of this experiment, their sensations were collected on a rating scale ranging from -3 “cold” to +3 “hot”. “0” corresponded to thermal comfort. The “average” thermal sensation for a given environment is called the Predicted Mean Vote (PMV).

These standards tell us a lot about summer comfort and the role of the user. For example, wearing a short-sleeved shirt in an office in the summer rather than a long-sleeved shirt will result in bearing with 0.4°C higher indoor temperature for the same comfort.

An overhead fan can help to bear with a 2°C higher indoor temperature for the same comfort. In many cases, this will avoid turning on the air conditioning.

In the early 2000s, work by ASHRAE showed that the Fanger model was not valid for unconditioned, naturally ventilated buildings. They state that in naturally ventilated buildings, the higher outdoor temperature in summer predisposes individuals to increased adaptability, thus avoiding the need for air conditioning. The higher the average outdoor temperature, the better the indoor temperature is tolerated: this is called adaptive comfort, and there are international standards to qualify it (such as ASHRAE-55 revised in 2010).

Beyond an indoor temperature of 32°C, however, there are real risks for alertness and health, according to the WHO.

Therefore, how to promote thermal comfort in a building, especially during heat waves?

Bioclimatic design allows a building to be designed according to the climate in order to reduce its energy and lighting needs. This approach also aims to improve the thermal comfort of the building and to avoid the use of air conditioning in summer, or at least to significantly limit energy consumption.

As an environmental design office that is a pioneer in passive design, TERAO has a transverse expertise unit for passive design and modeling (CMCB).

Here is a list of elements to consider in any bioclimatic/passive design project aiming at a better comfort of the users.

The location is very important, especially with regard to wind circulation. In winter, it is necessary to protect the building from cold winds, but in summer, on the contrary, natural ventilation should be encouraged. Fortunately, prevailing summer winds rarely blow in the same direction as prevailing winter winds, and it is possible to protect against cold winds while being more open to summer winds. The building should also be located near vegetated areas to provide beneficial shade in the summer. Through the evapotranspiration effect, vegetation can also slightly lower the temperature in the vicinity of the building.

The orientation of the building

The path of the sun is studied according to the latitude of the place where the building is located. A good orientation allows to benefit from useful solar gains in winter and to be easily protected from them in summer.

Placing glazed surfaces to the west is a bad idea: the transmitted solar gains are then maximal at the end of the afternoon when the outdoor temperature peak is the highest, which leads to overheating. Horizontal or slightly inclined glazing, which transmits much more solar heat gains in summer than in winter, should also be avoided.

The layout of the rooms

It is the fruit of a separate and often underestimated reflection. However, depending on the orientation of the building, the uses and the occupation, the rooms will not be arranged in the same way. The circulation areas, for example, do not require very strict comfort conditions. They can be unheated or only slightly heated in winter and serve as buffer spaces, or be located in areas where solar gain in summer is difficult to block. It is easier to accept a temporary discomfort in a circulation than in an office. Rooms that require a lot of natural light for a particular work should be located to the north, but beware: even a vertical north window in our latitudes transmits solar gain in both the mid-season and the summer, in the early morning and evening.

Would you like to learn more about other passive design strategies? Please stay tuned as they will be described in a following article.

If you need passive design, energy modeling expertise for your project, you can contact our BD manager Gaspard, our BD manager, at glemoinescelles@teraoasia.com. We would be glad to accompany you to calculate the energy consumption of your project and to assist you you in finding solutions optimize your building design to face future heatwaves.